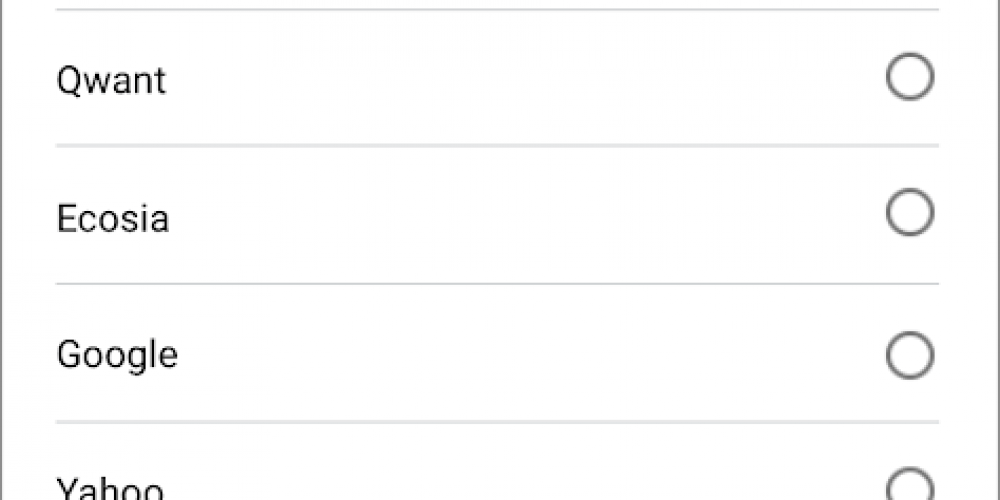 Google has announced which search engines will appear on its default search provider screen for Android users in the EU. Bing will appear as an option in the United Kingdom only, while DuckDuckGo and Info.com will appear alongside Google in all 31 EU territories, The Verge first reported Thursday.

Why is Google doing this? The Android search choice screen is part of Google’s efforts to comply with the European Commission’s July, 2018 antitrust ruling.

An example of the search choice screen. Source: Google.

How it works. Beginning on March 1, the search choice screen will be shown to users in the EU who are setting up their Android devices for the first time. Google, DuckDuckGo, Info.com and one other search engine (which varies depending on the region) will appear as options.

When the user selects their desired provider, the associated application will be installed and it will become the default search engine in Chrome and on the home screen search box.

Why these particular search engines? The search providers were selected using an auction method in which Google accepted bids on how much each provider was willing to pay per user that selects their search engine as the default.

The auctions were conducted on a per-country basis, using a “fourth-price” system, where the three winners pay Google the amount of the fourth-highest bid. The search providers selected in the first auction cycle will appear on the search choice screen for four months (until June 30), with future auctions occurring quarterly.

Auctions aren’t fair for all. “We believe this auction is at odds with the spirit of the July 2018 EU Commission ruling,” said Christian Kroll, CEO of Berlin-based search engine Ecosia, in a statement sent to Search Engine Land.

Ecosia uses its profits for reforestation efforts. “Planting trees in biodiversity hotspots is our priority, this means that biddings processes like this cut out purpose driven search engines like Ecosia,” said Kroll. Ecosia declared that it would boycott the auction shortly after the methodology was first announced in August 2019.

Where is Bing? Microsoft’s search engine is noticeably absent as a search choice except in the United Kingdom, where search ad revenue is likely to be higher than in nations with a lower GDP, The Verge noted.

Why we care. Despite offering users in the EU with three other search providers to choose from, it is not likely to make a big dent in Google’s share of the market as search is heavily integrated with its other Android apps and Google is what the majority of users are accustomed to.

Since an auction method was used, the choices merely reflect which search engines were willing to pay the most per user and is not indicative of search market share in those respective countries.

George Nguyen is an Associate Editor at Third Door Media. His background is in content marketing, journalism, and storytelling.

Learn more about Search Engine Land by visiting their website.

View all posts by George Nguyen →