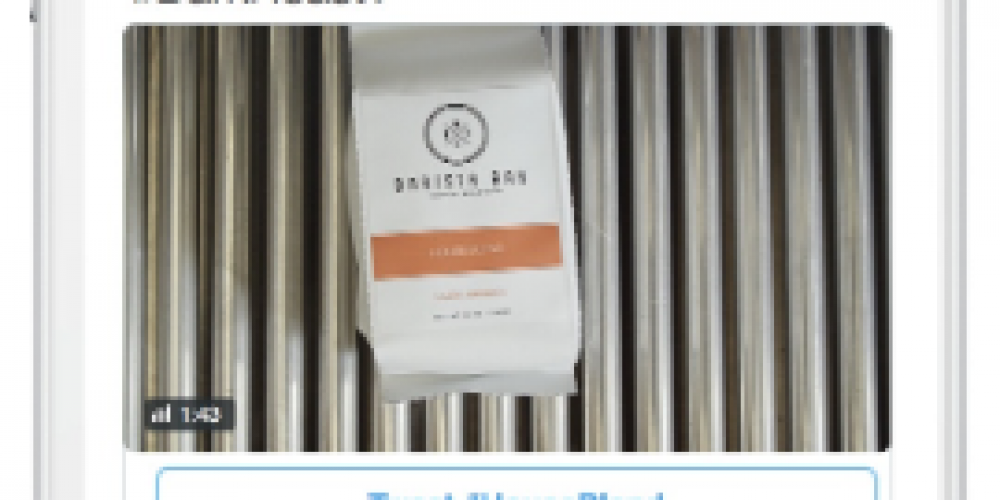 When a user taps a CTA button, the new Tweet composer opens with a pre-populated message, along with the creative and hashtag buttons. The user can then personalize the Tweet and share it with their followers: 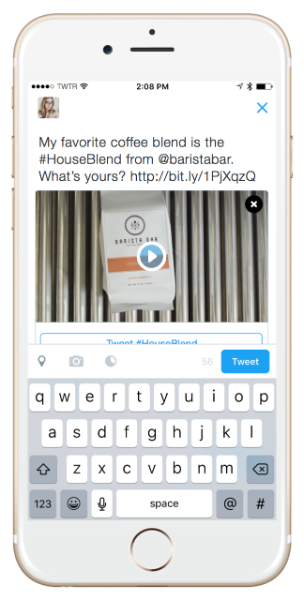 Next, the user receives a “thank you” message from the brand for engaging with the Tweet, which may also include a link to the brand’s website or post-click page: 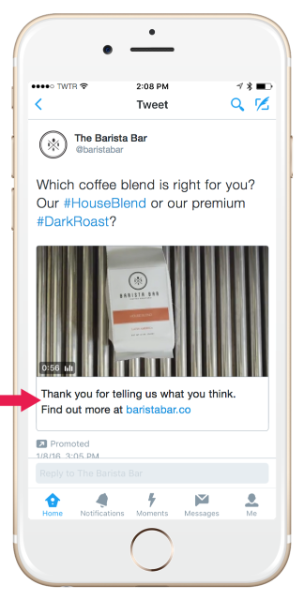 Finally, the new Tweet appears to the consumer’s followers in their timelines, and includes the original photo or video: 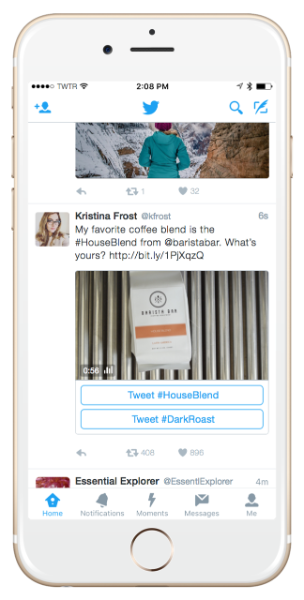 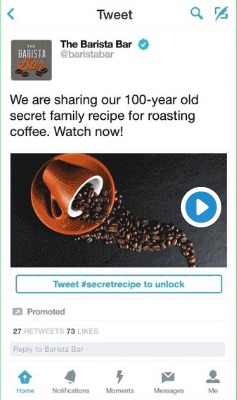 Instant Unlock Ads follow the same 3-step process as Conversation ads, but they make it even easier for consumers to engage with and spread a brand’s campaign message since they reward people for tweeting about a brand: 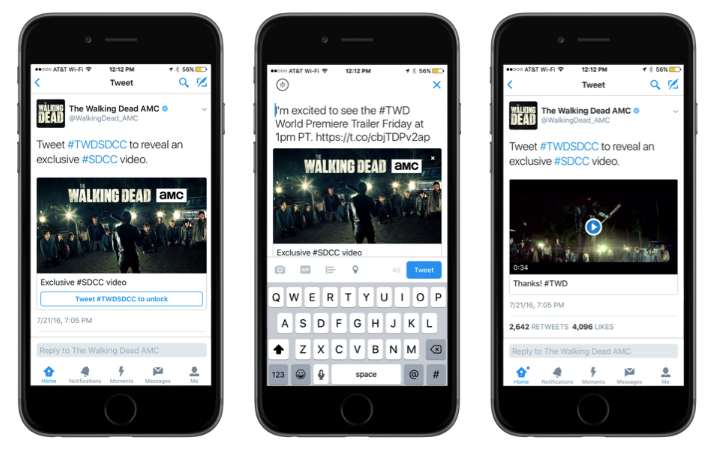 In addition to The Barista Bar and AMC, many other brands have also successfully used Twitter Conversational ads.

Samsung Canada was one of the first global brands to use the ad type: 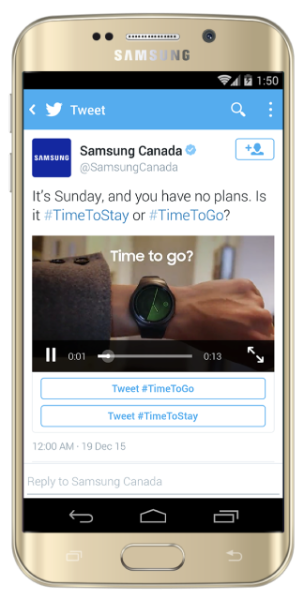 According to Mark Childs, CMO of Samsung Electronics Canada, the company was excited by the opportunity to initiate more meaningful conversation:

To stay ahead of the curve, it’s important to continuously evolve our social media engagement strategies to help our fans get closer to the Samsung Canada brand.

Lifetime was also one of the first to partner with Twitter to beta test a Conversational video ad around the premiere of their ‘Pitch Slapped’ series: 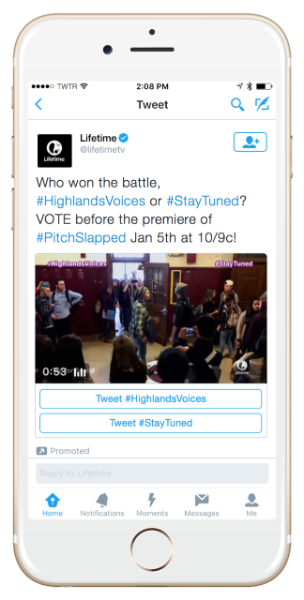 Marissa Vinciguerra, Lifetime’s Director of Social Strategy, explained why the company chose to experiment with Conversational ads on Twitter:

The Tweet features voting buttons encouraging fans to engage with our creative and is a perfect match for this campaign. 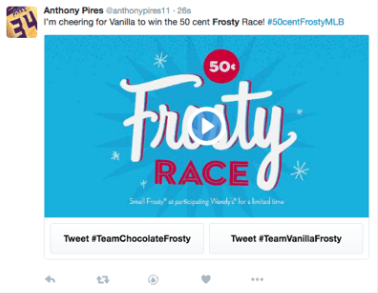 Every time users voted Team Chocolate or Team Vanilla, they shared the tweet and spread the engagement opportunity with their followers. Within 15 minutes, over 200 users were choosing a team and sharing the advertisement.

To drive engagement among teens during the launch of their “Taste the Feeling” campaign, Coca-Cola ran a Conversational video ad featuring influential creators: 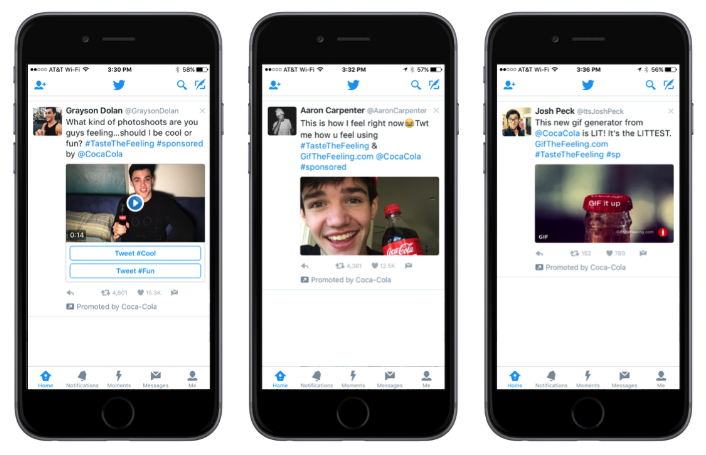 The campaign resulted in 180k mentions of @CocaCola and #TasteTheFeeling branded terms on just the first day.

Marvel launched their new emojis with a Conversational ad that encouraged Twitter users to engage by picking a side — either #TeamCap or #TeamIronMan: 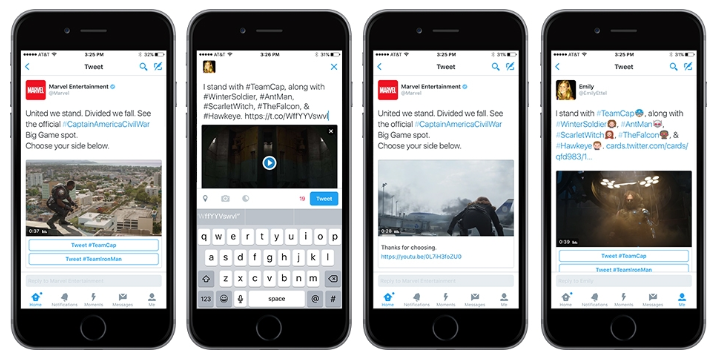 This generated massive amounts of conversation on Twitter over the following weeks. On the first day alone, there were 1.5M mentions of Marvel.

This ad type boosts organic conversation about brands because of the continued sharing of the CTA. As more people share their version of the ad, the more people will talk about the brand. Not only that, but this happens at no extra cost, which helps increase ROI as well.

Since Twitter users are sharing these ads and editing them to be their own, it enables consumers to serve as brand ambassadors. Consumers feel like they are a part of something bigger — a valuable asset to the brand — and are more likely to purchase from the brand than if they were to simply see the company’s advertisement.

3. Under the “Create or select creative” section, click “use a conversational card.”

Note: Conversational ads are not available by default for self-serve advertisers. To request access, you must file a support ticket.

In addition to the specs, there are also several best practices to follow to get the most out of your Conversational ads:

1. Make sure your visual is compelling

Since Conversation Ads are intended to make followers forward your brand message, the main content (e.g., image or video) needs to be compelling and valuable enough that someone would want to share it with their followers.

The Tweet copy automatically generated for users to share should be short enough that they can customize it with additional characters — because the more they tailor the Tweet to their audience, the more impact it will have on that audience.

By including two different call-to-action buttons, brands can boost engagement but also start an organic debate as well. This wouldn’t be possible with only one CTA button.

Branding is highly recommended with Conversational video ads. For example, present your logo in the upper left-hand corner, and place products prominently to drive product consideration.

Turn your Promoted Tweets into Conversational ads with customized CTA buttons and hashtags, prompting users to expand the tweet’s reach. Take it one step further than this with Instant Unlock Cards, rewarding people for spreading your message further with access to exclusive content.

No matter the ad type you select, complete your campaign by telling the same story narrative from ad to post-click page. See how Instapage can help you create these dedicated experiences at scale by requesting an Instapage Enterprise Demo.

View all posts by Stephanie Mialki →