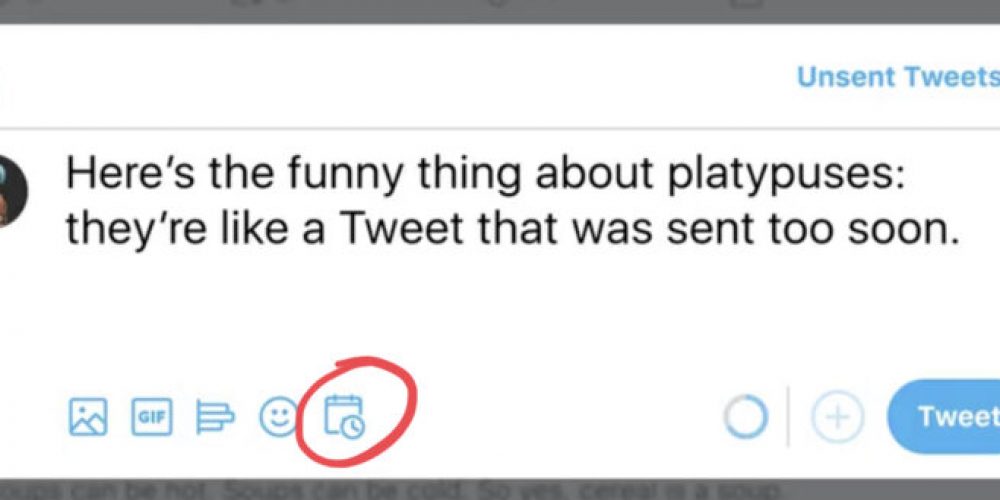 Twitter now offers its own method of scheduling tweets in advance, a feature that was once only available with third-party tools.

When using Twitter in a web browser, users will now see an option to schedule a tweet from the composer screen.

Not quite ready to send that Tweet? Now on https://t.co/fuPJa36kt0 you can save it as a draft or schedule it to send at a specific time –– all from the Tweet composer! pic.twitter.com/d89ESgVZal

How to Schedule Tweets on Twitter.com

Tweets can be scheduled in a few simple steps.

Twitter will give users the option to schedule tweets at any time up to 18 months in advance.

From the pop-up window you can specify the exact date and time down to the minute.

From this window you can also view a list of all scheduled tweets and make and adjustments if needed.

Again, this feature is only available on the browser-based version of Twitter. It’s not yet available on Twitter’s official mobile app.

Twitter’s mobile app updates are often more spread out, with a number of features added all at the same time.

That’s in contrast to the web based version of Twitter, which tends to have new features added more frequently.

I suspect with the next app update we’ll get scheduled tweets and other features exclusive to the web version of Twitter, such as saved searches.

In the meantime, you can visit Twitter on a mobile browser to use features that are missing from the mobile app.

Save Drafts on Twitter.com

Along with the scheduled tweets feature, the web based version of Twitter is also getting the ability to save drafts.

Saving drafts is a feature so ingrained in Twitter’s mobile app it’s easy to forget you can’t do it on the web version.

But it hasn’t been supported on the web version of Twitter, at least until today’s update.

If you’re familiar with saving drafts on the mobile app – it works exactly the same way on the web version.

Twitter will ask if you want to save what you’ve composed or permanently delete it.

If you choose to save a tweet as a draft, you can come back to it at any time and finish it.

As far as I can tell, tweet drafts can be accessed across platforms. So you can save a draft on the mobile app and revisit it on web based Twitter.

One of the most positive things about the ability to save drafts is that it gives Twitter users time to put more thought into what they’re sending out to the world.

Many people can relate to the feeling of tweeting something they later regret, which is something that drafts can mitigate to a certain extent.

Users can compose a tweet and then back out of it without abandoning it altogether. Then they can revisit the tweet at a later time and assess whether it’s still a good idea to send it.

I’d wager a lot of regrettable tweets have gone unsent since Twitter introduced drafts in the mobile app.

Now users can re-think their tweets by saving drafts whether they’re using the app or the web version of Twitter.